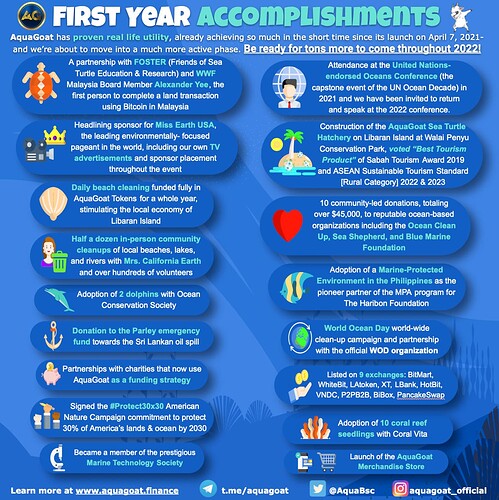 AquaGoat was first stealth-launched by an anonymous Australian developer on April 7, 2021. During the first few weeks from its inception, supporters from the Telegram community voiced the desire to create something meaningful from the abandoned meme token and formed an international development team. Supporters from different countries and walks of life volunteered their various skills, talents, time, and money to build up AquaGoat into a legitimate project. Continuing with the community-driven aspect, the development team always aimed for community involvement and full transparency for the project, holding polls and discussions with the community for key decisions with the project, culminating with a community-led decision to pursue ocean rehabilitation efforts with their first beneficiary, The Ocean Clean Up. During this time, AquaGoat’s original logo, Max the dabbing goat, was born.

Because the smart contract was renounced by the anonymous developer, no one on the team could make any changes to the code, which provided security but also caused stagnation and stunted growth. What the community built around this token though, is unparalleled. The community and volunteer development team is what gave the AquaGoat project life. Even with a locked contract, the team and community were able to pull together to accomplish so much — the construction of the AquaGoat Sea Turtle Hatchery in partnership with Malaysia’s FOSTER (Friends of Sea Turtles Education & Research), funded beach clean ups for a year using AquaGoat tokens on Libaran Island, made four charitable donations, adopted a coral reef and two dolphins, got listed on multiple exchanges, and started the long development of the AquaGoatSwap, to name a few.

While the project enjoyed enormous pumps from the very beginning due to several factors including the social media posts from Mark Zuckerberg, it was a double edged sword because, as with any other DeFi crypto project, huge fast pumps naturally led to equally quick and deep dumps. Regardless, the heart of the team and community persevered and achieved impressive accomplishments that no other cryptocurrency project had ever done before.

Eventually, however, the team hit a impassable wall. As time went on, market conditions changed and blockchain technology advanced, and the team realized that AquaGoat’s locked contract restricted the project from advancing as well. Because the contract was renounced, no changes could be made to innovate or adapt. Several members of the development team came and went until the current team established leadership (composed of both original and newer members). Although it hurt to see those members leave and also put a heavy strain on the remaining members to pick up the unfinished work, still the Goat pushed on and persevered. Even to this day, almost the entire remaining team has continued to diamond-hand their AquaGoat tokens despite seeing literally millions of dollars come and go.

The remaining team made the difficult, but necessary, decision to migrate the AquaGoat project to a V2 contract. Changes had to be made quickly, migration was open for several months in order to accommodate as many holders as possible while still being able to move forward. Due to the contract being renounced, the team could not move the locked liquidity or freeze trading, and everything had to be done by hand. Despite the messy and exhausting process, the volunteer team and community came out at the other end in a stronger position logistically than before with a V2 contract that could now adapt as the crypto space evolves. A new logo was born, and Max the Goat was dubbed the project’s mascot.

It was absolutely incredible for AquaGoat to be able to take part in world-changing events. It was invigorating to be amongst the brilliant minds at the United Nations-endorsed Oceans Conference. It was captivating to see AquaGoat’s commercials broadcasted live on television and represented on the big stage as the headlining sponsor at the Miss Earth USA 2022 pageant, the largest environmentally-focused pageant in the world. It was enthralling to see the dozens of newspapers and magazines around the world that covered AquaGoat’s developments and accomplishments. It was heartwarming to physically put together in-person community clean-ups with Mrs. California Earth.

The development team comes from a diverse background of established positions in different sectors and respectable companies, providing their expertise and experience for the mutual benefit of the AquaGoat project and its holders . This includes individuals who are knowledgeable and passionate about decentralized finance, cyber security, nonprofits, video game development and ocean and marine life conservation. On top of that, many of the the team members are doxxed for added transparency and trust.

There have been so many exhilarating and exhausting ups and downs in our first year of existence — but the Goat’s still here, and we’re not going anywhere . We could not have made it this far without the help and support of our community and the members who stepped up to volunteer their time and efforts to moderate, develop, lead, and spread the word about the project. In truth, there were moments that felt discouraging and overwhelming after pouring so much time, money, energy, and heart– but the community is truly the cornerstone that holds up this work. The seeds were planted in 2021, and they’re just about ready to bloom. We’ve accomplished so much in our first year, and we have so much more in the pipeline revving to go for 2022.

What started as an abandoned meme token has become something with real purpose and utility . We truly believe in the work we are doing in the world, and to us, this is a long term project with real life value, deep meaning, and limitless possibilities. The ball is rolling, and the train is gearing to leave the station. We want to bring everyone along with us for a great 2022 and beyond! The world hasn’t seen anything yet! 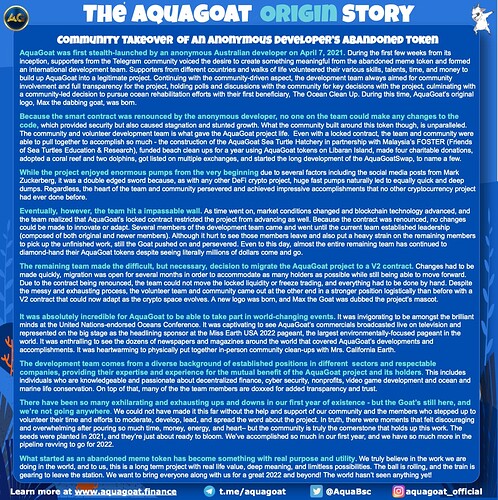